By far, the plant that has the most potential negative impact on your hiking experience is poison oak. Some people are particularly sensitive to this plant,

while others are hardly bothered.  There are a lot of myths about poison oak, and the best advice is just to stay away from it.
I've had a few brushes with poison oak in the last two years, and can report what it does to me. My first incident came when I worked on a volunteer project building fences, and a large poison oak shrub was unavoidable. I thought I was adequately protected by a long sleeved shirt, long pants, and gloves, but I still broke out a week later. The rash started on my hand, but the worst area was my stomach. At first the rash was a mass of small red bumps. Then they became filled with clear fluid. After that the affected areas resembled a third degree burn, with pink, raised flesh. I did get some relief from Benadryl's Itch Stopping Gel. The episode lasted about a week.
After each volunteer project the following year, I had similar, but subsequently weaker breakouts. I finally realized that I was being exposed to poison oak over and over again from my shirt. I wear a particular shirt for volunteer projects (and I never wear it except for projects), and the poison oak oil remained on the shirt, despite being washed after each project. I've spoken with other people who claim that when one member of the family has poison oak oil on his/her clothes, if those garments are washed with the household laundry, other family members contract the rash. So either wash your clothes separately, or perhaps get rid of the contaminated garments.
Some new products are

on the market, including a soap that neutralizes the effect of the poison oak oil. The trick is knowing you've made contact with the plant, then washing the oil off quickly with cool water (hot water is thought to spread the oil). If you stay on the trail while you hike, the chances of encountering poison oak drop dramatically. Most people I know have made contact with poison oak off the trails, either using the bushes as a bathroom, or bushwhacking through brush. Even if you stay out of the bushes, it may be a good idea to bring a small bar or tube of soap (Burt's Bees makes a poison ivy soap that works on poison oak) with you, and remember to wash any exposed area of skin as soon as possible after exposure. If you hike with a dog who likes to explore off the trail, keep the dog off car seats and away from your skin until you can give the dog a good wash -- canine to human contact is a common source of poison oak rash.
For a bunch of photos of poison oak at different times of year, visit the poison oak page (http://www.bahiker.com/plantpages/poak.html).
Yellow star thistle (centaurea solstitialis) is an invasive, non-native plant now common in grassy areas around the bay area. The sharp spines that radiate out from the stalk can cause discomfort when they pierce the skin. People react differently to the plant; some report severe irritation and itching. The plant is obvious year round, and is easy to avoid.


As far as animals go, it's been repeatedly said that the most dangerous creature you're prone to encounter hiking in the bay area is the tick. These tiny arachnids can carry Lyme Disease. Wearing long-sleeved shirts and pants makes it more difficult for ticks to latch on to you, and if your clothes are light colored it's easier to spot a tick. Typically, ticks hang out in grassland, but they can be almost anywhere. Once a tick hops on board a human it will usually head for a warm crease (armpits, behind the knee, etc.), and then bite. If you find a tick in the process of biting you, use tweezers to carefully pull the tick out. Try to get the entire tick out without squeezing so hard that the tick body crushes. Once you get the tick out, you can have the tick (and yourself) tested for disease. Contact your health professional for details of where to bring the dead tick for testing. Otherwise, check yourself for symptoms, which can start a few days after a bite. The most prominent symptom is a bulls-eye rash. If unchecked, Lyme Disease can cause chronic fatigue, joint pain, headache, and other more serious complications. For more info, visit the Center for Disease Control's website (see links, below).
There are other problem arachnids to watch out for across California, but the only dangerous spider you are likely to come across in the bay area is the black widow. A bite from one can be fatal, and a doctor should be located as soon as possible. Spiders, like snakes, generally will not seek you out, but bite in self defense when disturbed. Stay away from spider hangouts like woodpiles and unoccupied buildings. Tarantulas are known in the bay area (they leave their nests to mate in late summer/early autumn), and although they are frighteningly large, these spiders have a bite about as dangerous as a bee sting.
Speaking of bee stings, yellow jackets are common around San Francisco preserves. Rangers sometimes post signs near trailheads when yellow jackets are nesting near trails. If you see one yellow jacket, chances are there are more nearby, and you should leave the area. 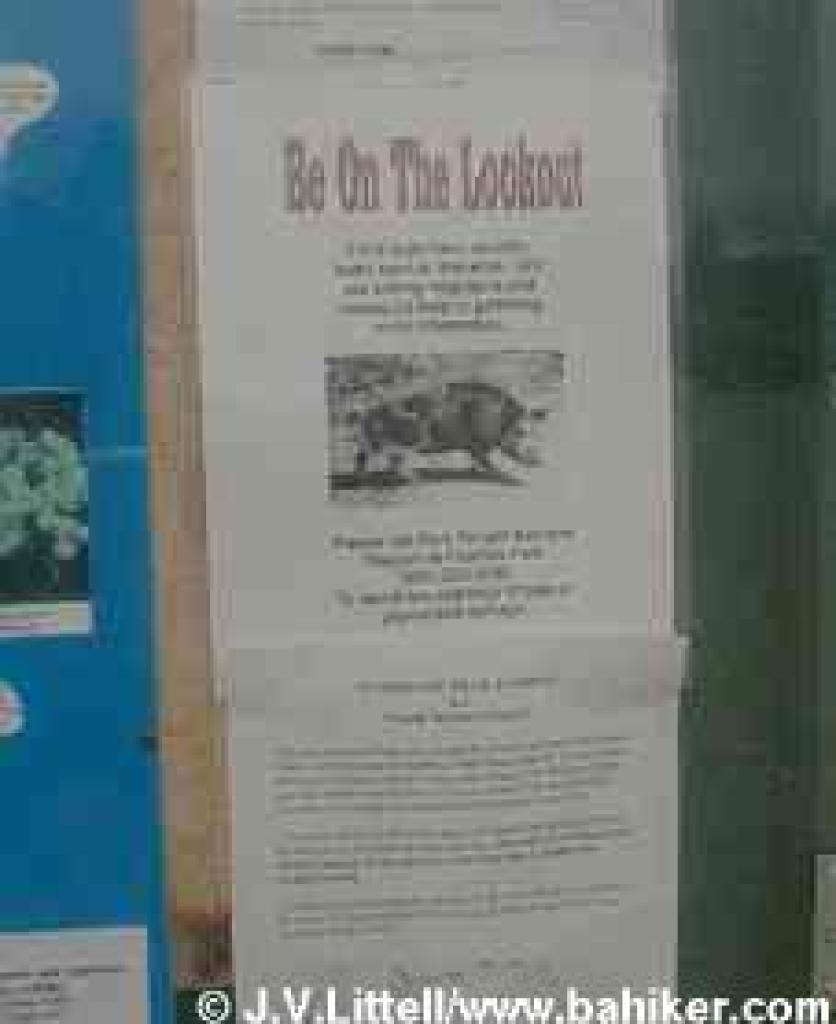 have occurred in California. These large cats eat mostly deer, and in most cases will run from humans. The most prominent recent fatality, a jogger ambushed by a mountain lion in the Sierra foothills, probably unintentionally provoked the lion's hunting instinct. In the growing bay area, mountain lion habitat is shrinking as humans invade their territory. Sightings are becoming more common, but some people actually may be mistaking bobcats for mountain lions, so the statistics could be misleading. If you do encounter a mountain lion, do not run. Back slowly away from the animal, and make yourself look larger by raising your arms above your head. If attacked, fight back. Do not bend down, as lions usually aim for the neck in an attack.
Coyotes (canis lantrans) have a bad reputation for unwarranted attacks, although traditionally on domestic animals. Omnivores by nature, coyotes are opportunist creatures who are known to take advantage of weak and/or small pets and livestock. Increasingly in the bay area people are reporting incidents with coyotes, especially while hiking with dogs. I've seen several coyotes when hiking, and I've never felt any fear. But it's important to remember that any wild animal can react in an unpredictable or menacing way. Keep a safe distance from any wild animal and report any aggressive animal behavior to the appropriate agency.
Wild, or feral pigs have drifted into the bay area, particularly in the south, and are posing a threat to wildlife and plants. Some of these animals are descendants of escaped livestock, while others are derived from breeds introduced to some ill-founded hunting preserves in the 1800s. Pigs of this ilk have no real predators (except for the automobile), and so populations can increase rapidly. Pigs love acorns, and it's possible our oak tree forests will begin to shrink as the pigs eat the fallen acorns, preventing new growth. They also damage root systems when they dig around trees. Another problem is their aggressive disposition and fearsome size. Pigs do sometimes charge humans, and have been even known to attack and kill small deer. They range in size from about 75 pounds to over 400 pounds. Mount Tamalpais solved their (previous) pig problem by installing miles of fencing (you can see some of it along the Ridge Trail north of Fairfax-Bolinas Road) and with aggressive hunting. In the south bay management agencies are trying to come up with a way to manage this problem, but in the meantime be on guard for the pig invasion.

There have been reports in summer 2001 of aggressive, non-rattling rattlesnakes. Several hikers have written to me describing encounters with rattlers that did not rattle and were reluctant to leave the trail. Rattlesnakes live throughout the bay area, but are most commonly spotted in dry, rocky, or exposed zones during the warmest months of the year. The standard "rules" for hiking in rattlesnake territory are:
1) do not put your hands (or feet) where you can't see them, i.e. the top of a rock outcrop or in a log pile.
2) be extra cautious in hot weather, as snakes are more active.
3) scan the trail continuously as you hike.
4) keep children from running ahead on trails. Bites to children are more severe than to adults.
5) Avoid tall grass where you can't see your feet (or a potential snake).
Should you encounter a rattler, once it is aware of you, its body language will reveal its mood. A coiled rattler is primed for a strike, while a stretched rattler is more sanguine (although snakes have been reported to "lunge"). If the snake is within striking distance, you should probably stand motionless and wait for the snake to calm down and move. Small, slow steps backward are also an option. If you're out of immediate range, you could either skirt the snake, or wait for the snake to move. Some people believe tapping the ground with a stick (from a safe distance, rather than in the snake's face) will encourage the snake to move on.
Do not injure or kill a rattlesnake. They are an essential part of the bay area ecosystem. Also, educate yourself about rattlesnakes and gopher snakes, which can be easily mistaken for each other.
If you happen to get bitten by a rattlesnake, follow this protocol:
1) Try to stay calm (which seems impossible, but the toxin is spread through your blood, and the faster your heart beats, the faster it is dispersed).
2) Take a few minutes and call for help. You could call the nearest ranger station (this is another good reason to carry maps, as there are commonly phone numbers on them), or a nearby hospital. Rattlesnake serum is not always available at every hospital, and it's best to find a hospital with a confirmed supply. Rangers can assist you in getting back to the trailhead, and can arrange emergency medical transport.
3) If you don't have a phone, or if the phone doesn't work in your location, assess the situation. If you're alone, you'll have to hike out by yourself. If you've got company, either send the other person back to the trailhead and/or emergency phone, or have the person help you walk back.
4) Forget the old stories of cutting the bite area and sucking the venom out. There are snake bite extraction kits available at outdoor stores, but they are perhaps best suited to remote attacks, where hiking back to the trailhead is not practical. Unless you're deep in the backcountry, don't waste time trying to get the venom out; put your energy into making your way to a hospital.
5) What to do if you are on a backpacking trip, more than 1 day from help and out of cell phone range? Advise varies, but people have survived by simply staying put and waiting the bite out. A healthy adult may be able to process the venom out of his/her system. Keep the bit limb lower than the heart, remove restrictive clothing and/or jewelry, and wash the bite area with soap and water. Hopefully you would have a suction extractor, which should be used within 15 minutes.